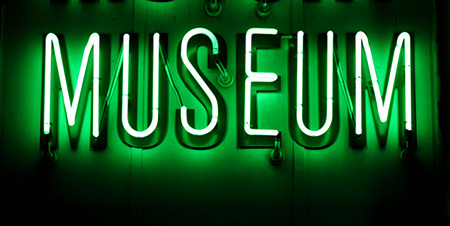 The Fremont Street Experience is one of the top attractions in downtown Las Vegas, NV. Some of the district’s most iconic hotels and casinos are based at this mixed-used hub that has a vintage Sin City flair. Free concerts, zip lines and laser light shows are some notable features of this pedestrian mall along historic Fremont Street. 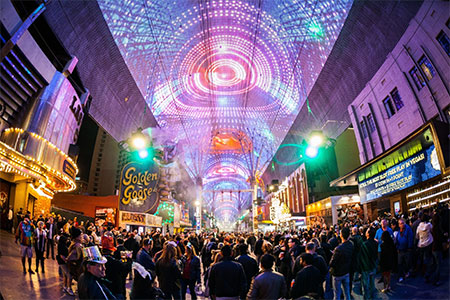 Click for more details on the Fremont Street Experience

Some of the best hotels in downtown Las Vegas are located at the Fremont Street Experience. There are plenty of gaming opportunities at the casinos of the Golden Gate, Golden Nugget, Fremont and Four Queens hotels. You can also win some high-stakes games at the Binion’s Gambling Hall. Intimate bars with vintage themes, chic lounges, casual eateries and upscale restaurants are some of the premium amenities at the district’s hotels.

Sponsored by the local casinos, free music concerts are hosted by the Fremont Street Experience from the spring to fall. Some of the biggest names in rock perform at this cool venue in the heart of Vegas.

The Viva Vision Light Show presents dazzling visual and booming audio effects inside the Fremont Street Experience. Cutting-edge optical technology transforms the vaulted roof of the mall into a stunning spectacle. More than 12.5 million LED bulbs illuminate the interior of the shopping mall. Rock, pop and dance songs are also synchronized with the striking laser effects. More than 500,000 acoustic watts resonate through the retail hub during the Viva Vision Light Show.

Featuring a gigantic figure of a classic slot machine, the SlotZilla Zip Line is another signature attraction at the venue. The standard experience gives you access to a zip line that’s seven stories high. With an upgrade to the Zoomline, you’ll soar 11 floors above the ground. Awesome costumes of iconic superheroes, such as the Power Rangers and Superman, are available at the SlotZilla Zip Line.

Location and Getting There

Spanning several blocks between Main Street and North 4th Street, the Fremont Street Experience is one of the most exciting attractions in downtown Las Vegas. The Regional Transportation Commission offers convenient bus services that stop near this indoor shopping mall. Some RTC routes that serve this vibrant district include the DEUCE, WAX and SDX. Interstate 515 merges with Las Vegas Boulevard North near this popular complex.

Located in downtown Las Vegas, Nevada, The Mob Museum presents the history of organized crime in the United States. Housed in a historic Neoclassical building that was once a courthouse, the museum features more than a dozen permanent exhibits on American mobs. Click to book admission to The Mob Museum.

The first floor of The Mob Museum features the 100 Years of Made Men exhibit. Crude Mugshots, elegant portraits and undercover photos of infamous American criminals are displayed at this gallery. The Wall of Infamy highlights key individuals who shaped the growth of major American cities, including Las Vegas. At Listening In, you can tune into recordings of mobsters and their affiliates. The Organized Crime Today exhibit focuses on the contemporary criminal enterprises in America and worldwide.

Other highlights on the first level of the museum include the Firearm Training Simulator and Crime Lab Experience. Both facilities provide behind-the-scenes views of law enforcement. Carbon-powered firearms allow guests to take aim at wall-mounted targets. Forensic criminal analysis is also covered in the genuine lab-type setting.

Mob’s Greatest Hits is installed on the second level of The Mob Museum. This gallery includes authentic weapons that have been recovered from arrested mobsters. Pistols with silencers and poison-filled vials are on display at this section. The second floor also includes the Web of Deceit and Open City exhibits. Additionally, you can learn about the Kefauver Hearings that focused on nationwide organized crime in the 1950’s.

The third level of the building has original artifacts relating to the St. Valentine’s Day Massacre, which occurred in Chicago in 1929. A brick wall from the infamous crime scene is featured in the exhibit. Other galleries on the upper level include the Feds Fight Back, Follow the Money and Tough Little Town.

The Mob Museum stands on Stewart Avenue in downtown Las Vegas, NV. Hourly rates are charged for the museum’s on-site parking lot, and there are plenty of parking options available at neighboring casinos and shopping centers.

Offering fare-free service, the Downtown Loop stops near this attraction and other major local venues, such as the Fremont Street Experience. This shuttle also serves the Bonneville Transit Center, which has several platforms for Regional Transportation Commission buses. Some of the RTC buses at this transfer hub link the downtown area with the Las Vegas Strip.