Running for about 4 miles, the Las Vegas Monorail offers express transportation on the Las Vegas Strip. This modern transit service stops at seven stations that are conveniently located near major resorts, casinos and other venues. A ride on the elevated monorail tracks is also a cool sightseeing experience in the heart of Sin City.

Click to purchase tickets for the Las Vegas Monorail

The Las Vegas Monorail originally opened in 1995 as part of major transportation expansions on the Strip. In its early years, this rail system ran between Bally’s and the MGM Grand. Bombardier Transportation has played a major role in developing the trains for this innovative transit system. Five years after opening, the monorail system was officially absorbed by a nonprofit entity that was carefully selected by the state legislature.

The MGM Grand Station is the southern terminal of the Las Vegas Monorail. Some of the Strip’s top shows and nightlife events are hosted by the MGM Grand. For example, the massive Hakkasan nightclub is within walking distance from the station. Cirque de Soleil is another major entertainment highlight at this iconic resort.

The monorail tracks also meander through other notable resorts on the Strip, such as Bally’s and Paris Las Vegas. A single station is also designated for the Flamingo and Caesar’s Palace. After stopping at Harrah’s and the LINQ, the Las Vegas Monorail takes a sharp turn heading northbound. One of the largest meeting venues in North America, the Las Vegas Convention Center has its own station along the monorail system. There’s also a station at the nearby Westgate Las Vegas, a well-established hotel that opened in the late 1960’s.

The Sahara Station is the northern terminal of the Monorail. In business since the 1950’s, the Sahara is one of the oldest hotels on the Strip. The northern end of the monorail system is also within walking distance of the iconic Stratosphere Tower that offers the best aerial views of the city. Click for a map of the Las Vegas Monorail system.

The Las Vegas Monorail trains typically arrive at each station every five to six minutes for most of the day. Automated ticket vending machines are installed at all stations, and mobile tickets may also be used to pay for the fare. Passengers can purchase tickets for a one-way ride or unlimited rides for multiple days. The service operates every day of the year, between 7am and 3am.

The Big Bus Tours offer exciting ways to explore various parts of Las Vegas, Nevada. Running on several different routes, the double-decker buses allow ticketed passengers to hop on and off throughout the day and evening.

Known as the Red Route, The Strip Tour allows passengers to experience the premier entertainment, gambling, shopping and partying on the iconic Las Vegas Boulevard. Running every 30 to 40 minutes, this bus tour stops near some of the most famous casinos and resorts on the Las Vegas Strip, including the MGM Grand and Excalibur. The Red Route also stops near major shopping venues, like the Fashion Show Mall and Miracle Mile Shops. Additionally, the Strip Tour drops off tourists near the Welcome to Fabulous Las Vegas sign at the southern tip of the Strip.

Designated as the Blue Route, The Old Las Vegas Tour highlights the rich history of the city. This Big Bus Tour circulates the downtown district, which includes some of the oldest casinos and hotels in the region. For example, you can hop off near the Golden Nugget Hotel, which opened in the 1940’s. The Mob Museum and Fremont Street Experience are some other attractions that you can reach by riding the Blue Route. Additionally, some of the route’s major shopping destinations include the Pawn Stars shop and Las Vegas Premium Outlets.

If you’d like to experience the hot nightlife of the Las Vegas Strip, board the Green Route for The Night Tour. As you navigate the Strip, you’ll see famous landmarks and attractions illuminated with dazzling lights. The fountains at the Bellagio Hotel, Eiffel Tower at the Paris Hotel and Stratosphere Tower dominate the skyline of Sin City at night. You’ll also see plenty of dazzling neon and LED lights marking the casinos, shops and other venues along the lively Strip. The Green Route runs between the Circus Circus Hotel and Excalibur Hotel. 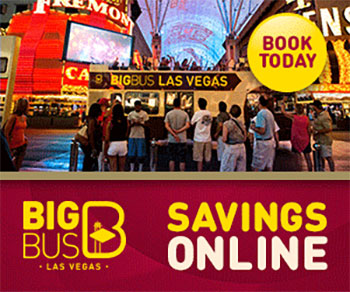 The Big Bus Tours in Las Vegas offer a variety of ticket options that are designed with flexibility and convenience in mind. The Classic pass is valid for a single day of hopping on and off marked buses. The Premium pass is valid for two days, and it provides access to the Eiffel Tower Experience. You’ll have the freedom to ride the tour buses for up to three days with the Premium ticket, which also includes the Night Tour. All tours are led by English-speaking guides who reveal cool facts about the landmarks on the Strip and in downtown.